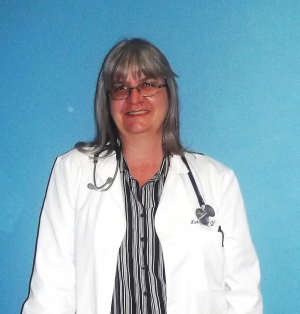 Dr. Lark Behrens started working at Canada del Oro Pet Clinic when she first moved to Tucson in 1985. She worked here for several years as a Certified Technician. During this time she returned to finish her degree at the University of Arizona, in Animal Science. She then attended Veterinary school at Oregon State University. After graduating from Veterinary school in 1995 she returned to Tucson. She worked emergency at Animal Medical Center of Tucson for 4 years, then returned to work at Canada del Oro Pet Clinic.

She worked relief for one year at Canada Hills Veterinary Clinic, then worked at Sahuaro Vista Veterinary Clinic for four years, and most recently VCA Animal Medical Center of Tucson for over six years. She was the Medical Director at her last position. Dr. Behrens then purchased Canada del Oro Pet Clinic on November 1st, 2012.

Dr. Behrens was married for 26 years to her husband Mark who died from a heart attack in July of 2011. She is now a single parent with two daughters, Alex who is 19 and Dani who is 16. Alex now goes to the U of A where she plans to study premed & sign language. She is in the color guard with the band and still plays the clarinet.. Dani is now driving and has a pickup truck. She enjoys hunting and fishing and got her first elk in Wyoming in 2016. She wants to be a Geologist/Paleontologist and plans to move to Alaska. They have two dogs and two cats, one of them is going to be 18 years old in April! They enjoy cooking and baking as well as swimming.

Debbie Sanders graduated from Pima Medical Institute as a veterinary assistant in 1995. She has been working full time at Canada del Oro Pet Clinic since, and earned her C.V.T. (Certified Veterinary Technician) degree in August of 1998. She is a also a Veterinary Healthcare Advisor II, and has received certification in Veterinary Dermatology and Behavior Modification. Her professional goals are to continue to work in the field of veterinary medicine and to become a Veterinary Technician Specialist in anesthesiology and dentistry.
Debbie and her husband Troy have been married since July of 1974 and they have three children- Matthew,who’s job has now taken him to Africa ; Jeremy,who is married to Babarba. with two children, Haley and Hunter, and Stephanie, who has three children, Kaitlyn ,Nathan and Lilly. All five grandchildren are Grandma & Grandpa pride and joy. Debbie’s favorite past time is to spending time playing, loving and spoiling grandkids. Debbie fells she is truly blessed with a loving family,friends and a career that she loves!

The Sanders pets include Maggie a Jack Russell, and one cat Levi a orange tabby.